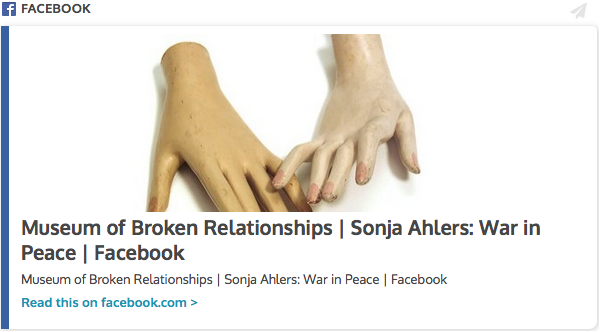 Ever had a broken heart? Own an object that won’t let you forget? The Museum of Broken Relationships is coming to the Yukon just in time for spring breakup. Conceptualized in Croatia by Olinka Vištica and Dražen Grubišić, the exhibit has since toured internationally, amassing an amazing collection.Its Canadian debut here in Whitehorse will include pieces flown from Zágreb, but also your mementos of once grand loves.

War In Peace (Total Eclipse of the Heart)

This exhibition by Whitehorse-based Sonja Ahlers will also be the launch of her upcoming book, entitled War In Peace, which explores the breakup that brought her to the Yukon. Influenced by the 1970s book, The Joy of Sex, the poetry of Emily Dickinson, and other elements, Ahlers’ installation will delve into the emotional trauma of starting over.